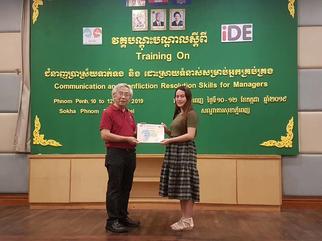 It all began with a simple idea

Creating a global force for change based on the power of business to solve poverty.

When Paul Polak founded International Development Enterprises (iDE) in 1982, his idea that business was the solution to poverty was new and untested. Thirty-four years later, Paul’s concept has been proven not only by iDE but also by the increasing number of established and new organizations that have embraced this approach.

Reinventing the donkey cart
iDE's first project emerged from Paul Polak’s visit to a Somalian refugee camp in 1982. Paul noticed that the refugees were carrying wood, water, and food by hand or with a very inefficient cart pulled by a donkey. Using abandoned car parts for affordability and working with displaced blacksmiths in the camps, Paul modified the donkey cart so that it had a more efficient center of gravity, enabling it to carry more weight. He then assisted the blacksmiths in selling these improved carts to other refugees for $450. With the new cart, a buyer could earn $200 a month, paying back the loan in 2.5 months. Five hundred carts were sold, producing more than $1 million of net income for cart owners the three years of the project.

Pumping it up
The problem in Bangladesh in the early 1980s was the lack of irrigation in the dry season. Although some farmers had obtained diesel pumps from the government, they charged their neighbors high sums instead of making the water available at a reasonable rate. iDE believed that manually-powered irrigation “treadle pumps” could solve the problem and allow small-scale farmers to bypass the “water lords” and increase their productivity. In a five-year period, iDE increased annual sales from 14,000 to 75,000. As of 2015, more than 1.5 million treadle pumps have been sold in Bangladesh, creating $1.4 billion in net additional income per year.

The success of these projects confirmed iDE’s mission that simple, affordable technologies enable hardworking rural households to become micro-entrepreneurs, creating a path out of poverty that is both sustainable and replicable.

Market expansion
iDE’s initial successes demonstrated that entrepreneurs were everywhere, including refugee camps in Somalia and small farms in Bangladesh. Given the right technology and access to open markets, these struggling populations could increase their income and rise out of poverty. Over the last three decades, iDE has expanded its footprint to engage with local markets in more than 11 countries in Asia, Africa, and Latin America.

The rise of WASH
iDE’s entry into designing solutions around water, sanitation, and hygiene (WASH) began in 1995. Staff in Vietnam noticed that households were elevating the treadle pumps in order to capture water in buckets, which they could then use in their homes for cooking and cleaning, as well as to irrigate household gardens. Realizing that a hand pump would be more useful, iDE designed a more inexpensive, easier-to-install model, resulting in sales of over 64,000 pumps. This caught the attention of the Vietnamese government, who wanted to know if iDE could achieve similar results with latrines.

Not only was iDE successful in selling latrines, our new process for designing, marketing, and delivering latrines was adopted by the Vietnamese government, as well as many organizations working to improve sanitation coverage. And our success with household irrigation pumps and latrines led us to realize that clean water was a prerequisite for our customers to be able to improve their livelihoods, which gave rise to our current full-sector market approach to WASH.

From Vietnam to Cambodia, then Bangladesh and Nepal, and now to Ghana, Burkina Faso, and Ethiopia, the approach of developing markets for sanitation and clean water has brought WASH solutions such as improved toilets and water filters to nearly 4 million individuals so far, and the adoption trend hasn’t crested yet.

TODAY
From products to services
Along the way, iDE has learned that the key to market-based solutions to poverty isn’t any specific technology. It’s how that technology—right-sized, resource-smart, and affordable—is implemented in the particular region, market, and client base that determines its success and sustainability. We have developed an entire service suite for ensuring market viability, including partnerships with local providers, knowledge and training in the use and maintenance of technology, and ensuring the availability of necessary inputs. We’ve also identified the need to extend credit to low-income populations so they can afford to adopt technology and other life-changing products.

In order to continue to be a positive force for progress, we at iDE have constantly challenged ourselves to learn from the past and to seek out new technologies and interventions in every place in which we do business.